You are here: Our School » Academy Head's Blog » Signs of Spring
Our School

February half term is always a great time to get out and about and see what is happening around us. Even more so in the current situation where long walks are sometimes our only time outside. Every walk I do at the moment I get more and more excited. Things are changing all around us rapidly. The weather is far warmer and signs of spring are all around.

I was excited to see snowdrops in full bloom on my walk. Snowdrops are an amazing sight to see during the winter months. They are a plant that can survive the harsh winter conditions and can be found growing up through the ice and snow in January. They are at their peak now and are often found in damp areas. The shape of the flowers are of interest and provide a stimulus for sketching. We have plans on planting these in  our Academy after Easter. 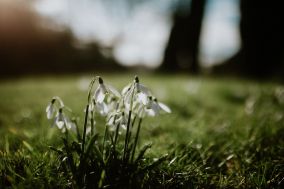 Further signs of spring are daffodils. Many of these are already in flower on our Academy site. Daffodils are also know as Narcissus linked to a mythological meaning.

Mythological meaning (Taken from https://www.interflora.co.uk/content/about-narcissi/)
A well- known myth surrounding the narcissus flower comes from Greek mythology. Narcissus was the son of the River God Cephissus and the nymph Liriope. He was an incredibly handsome young man who belittled those who loved him.

In the classic version of this tale by Ovid (a Roman poet), Narcissus was walking in the woods when a mountain nymph called Echo saw him. Attracted by his beauty she decided to follow him. When Narcissus shouted 'who's there?' Echo responded by repeating his words back to him because that's all she could do.

Eventually she decided to reveal herself and embrace him. He rejected her advances and told her to leave him alone. Heartbroken, she spent the rest of her life roaming the woods until nothing was left but the sound of her voice (an echo). Learning of this, Nemesis - the Goddess of Revenge - decided to punish Narcissus by drawing him to a stream where he saw his reflection. Unable to look away from such perfection, he fell in love with it.

When his love wasn't reciprocated, he couldn't bear to leave his reflection. After staring at it for a few days he grew exhausted, fell into the stream and drowned. It's said that daffodils are called narcissus because they commonly grow on the banks of streams and rivers where Narcissus perished. 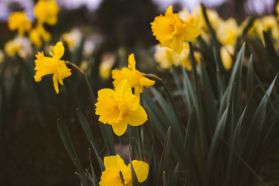 As we continue in to spring I will be heading out looking for the buds on plants and trees, looking for blossom, noticing the wildlife returning and birds nesting and the changes in the weather. We often walk around looking at what is directly in front of us but I challenge you to go for a walk and look all around you. What do you notice? You may find your 5km walk is all of a sudden only 2km as you look and explore but what you will see inspires the imagination and awakens our senses.

We will be doing this with the children over the next few months. We will see a significant change to our grounds over this time and we will be exploring all the changes and reasons why these are happening.

Spring is probably my favourite time of year!